I would have rather forgotten the scene. Beaconsfield-Outremont lay on the hot pavement of Park Avenue. His Lexington Red short shorts, being too tight, had ripped on impact. The ice cream that had been his companion moments before had landed on his face, strawberries nearby, as if arranged by Jackson Pollock. Here was a twisted Beaconsfield-Outremont, shorts ripped, fluorescent and frugal nickers exposed. He was covered in bruises, cuts, and dessert. Most concerning of all, he was perfectly immobile.

Had the incident occurred in London, a small crowd would have formed. Volunteers would have emerged politely offering help. This being Manhattan, where incidents and accidents are part of daily life, blasé passersby merely gave a quick look before continuing on their way.

“Do you think he is seriously wounded, Ypres?” I arrived at the end of my sentence with great difficulty. My throat was tightening.

Of course, Beaconsfield-Outremont was a nuisance. A man who borrowed his sense of style from one of the great fashionistas of our time: moi! A man whose dedication to his legs led to odd choices in life. Yet, through it all, his misguided choices and malicious grins, I had become attached to this unconventional figure. Not attached in any way as one would be attached to a family member, first love, dear friend, or loyal pet. It was, I suppose, the attachment one feels towards a familiar yet distant figure.

The best simile I can think of is the attachment one feels to an old librarian. One rarely considers her as a person, with a full and well-rounded life – that is why there is mild surprise if one sees her strolling in the park, or worse, at the cinema attending a screening of a film based on a book. But, one is attached to her, because one knows that when one goes to the library she will be there, and that if one is laughing too loudly while reading A Mayfair Conundrum, she will shush one with mild and understanding reproach.

These were my sentiments towards the muscular-thighed Michael Beaconsfield-Outremont. He was my Montrealer. And the thought of never again seeing him pop up unexpectedly in London, Milan or Toronto, wearing the same piece of clothing that I was wearing, was disheartening. For how else would I wear it best?

Ypres did not answer my question, so I ventured another one. It escaped me like a slow whisper.

“Michael, are you alright?”

I turned my trembling face towards Ypres. I sought comfort in her steadfastness.

I opened my mouth with difficulty, readying it to speak. A groan escaped. I tried again. Another groan.

Yet, there was something unusual with these groans. They were an octave too low.

I soon realised that their altitude was also not quite right. It became evident that they were not emitted from my mouth after all. They arose from below, and what was below was Beaconsfield-Outremont.

I was both relived and happy. The worst had been avoided, for now.

Beaconsfield-Outremont uttered a series of untranslatable idioms, usually heard when an inhabitant of la belle province has had their toes crushed by a heavy surprise.

It is during this linguistic deluge that the driver and occupant walked out of the Escalade that had struck Beaconsfield-Outremont with such purpose. They approached as if ready to meet with their lawyers to discuss the steps of a merger and acquisition.

The driver, hands on hips, issue his assessment of the situation in a New Jersey accent (Hoboken East, to be precise).

Rising to the occasion, as would a general after realising that the field marshal is too pickled to form complete sentences, I intervened with commanding restraint.

“He is obviously not fine. Look at him! He is twisted, his clothes are ripped, and he has melted ice cream all over his person.”

“So what? He looks like a guy who’s had great Saturday night. I’ve driven worse after an Easter egg hunt in Newark. And those were little girls. He’ll walk it off. He ain’t no little girl.”

“Sir, first off, as a newly redeemed feminist, I must ask that you retract your insinuations about the frailty of little girls. Girls are strong. As a matter of fact, I know of a Girl Scout who hangs around Regent’s Park whose strength is a menace to the surrounding area.”

“You ain’t from here. Why do you talk so fancy?”

“My English, BBC London, if you must know, is neither here nor there. And yes, sir, you are correct, my friends and I are not from here. Our nations are part of the Commonwealth. But that does not mean that you can run us over, albeit on Park Avenue. It is a disgrace! We will need to call the authorities to give this man medical attention, and make a report in view of criminal charges. You must know that I can easily obtain legal counsel from one of the attorneys-at-law with too many teeth who advertise in English and Spanish on the subway. You should also know, that being an employee of the United Nations Development Organisation, I shall have to raise the issue with the Secretary-General of the United Nations, and the Permanent Representative of my home country: the United Kingdom of Great Britain, and, for now, Northern Ireland.”

I stood triumphant as the driver slouched, stunned. Beaconsfield-Outremont gargled something incomprehensible. Ypres was still kneeling by his side.

I took a mental note of the scene, preparing for my inevitable exclusive interview with the press. I would save the juiciest part for the British media, but, of course, I could not refuse a feature in The New Yorker or Vanity Fair. I was taking note of what to wear, and the driver, convinced British English was another language, opened a translation application on his phone, when the occupant of the Escalade approached.

He had been taciturn during the proceedings. He stood in a precise yet shapeless suit with the confidence of a victorious Soviet general. Indeed, something about him gave the impression that he had attended many a Red Square parade.

“I shall be delighted to inform the Secretary-General personally of this incident,” he said with a slight rolling of the r’s.

“Of course,” his tone darkened, “I will also have to remind him, and others, of the application of the Vienna Convention on Diplomatic Relations.”

For a moment, I thought that as an intern at the United Nations, the Vienna Convention, in this situation, applied to me and Beaconsfield-Outremont. It is only once Ypres coughed (the third time, the first two I ignored her, being in the middle of my reflection) that I realised my initial thought may not hold. She pointed towards the licence plate of the Escalade, deformed by Beaconsfield-Outremont’s limbs, from which could be read “diplomat” in twisted letters.

Sensing my confusion, she uttered an explanatory: “diplomatic immunity”.

The driver and occupant took Ypres’s phrase as their cue to jump back into their instrument of destruction, and drove off with impunity. The dust in the dry summer air was settling when the first sirens could be heard approaching in the distance.

“That will be the ambulance,” said Ypres, still kneeling by Beaconsfield-Outremont.

“Well, at least he shall get the necessary medical attention.”

Beaconsfield-Outremont groaned, a new habit of his, motioning to Ypres. She approached his face, and he whispered into her ear. She nodded at regular intervals, before giving me the even stare of a haddock.

“Indeed, it is not, but he has informed me that he does not have medical insurance, and as the United Nations does not offer any form of insurance to its interns, or the United States have universal health insurance…”

“He’s supposed to pay a fortune he does not have or risk ill health from his injuries.”

Ypres gave a grim nod. The ambulance could be seen in the distance and was fast approaching. Our course of action was narrowing by the second.

In a flash, as if having trained for the occasion all her life, Ypres expertly leveraged Beaconsfield-Outremont off the street and over her shoulders. “Would you mind collecting Mr. Beaconsfield-Outremont’s belongings?” Her tone was balanced. I obliged like a stunned automaton. I picked up the ripped fragments of his shorts, his tyre-marked wallet, and the tip of his ice cream cone. If Ypres was experiencing any effort from having the Montrealer on her shoulders, she showed none.

Once I motioned that all was collected, I followed Ypres as she briskly walked away from Park Avenue, Beaconsfield-Outremont on her shoulders, still groaning. As we turned the corner, I gave a last backwards glance towards the thoroughfare. The ambulance had just arrived. The scene of the accident was empty.

Please do not hesitate to report typos or spelling errors in the comment section below. They will be duly prosecuted under the law. (Many thanks to Tooty Nolan, who has become chief prosecutor in this regard).

Vasa and Ypres’s first full-length adventure, Vasa and Ypres: A Mayfair Conundrum, is available on Amazon. If you enjoy Vasa and Ypres, please share on social media. Vasa and Ypres is on Twitter. You can also join over 1950 WordPress followers.

Should you be desperate to part with your money, and, in the process, fund Uncle Edward’s Vasa Assurances, a donation button is available on the homepage. Donations will help keep the Vasa and Ypres project going.

6 thoughts on “Chapter XXXVIII – Or!” 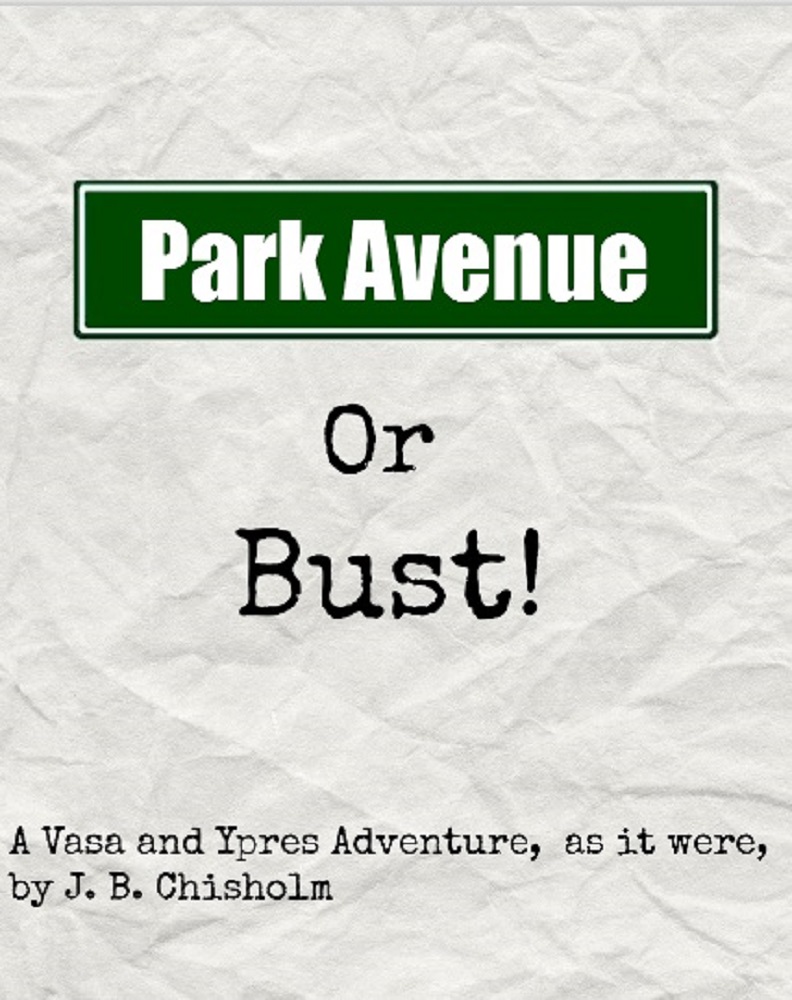